For a long time I was on the board of an unlisted public company that wholesaled meat. The Chairman had a very simple attitude to debt collection. If someone owed us $20,000 then he would spend $50,000 trying to get it back. That may not seem to make economic sense but it made sense when you think of debtors as a network. He simply wanted to send a message that we were not to be screwed with, and that we would chase you to the end of the earth. In the meat industry if you got even a whiff of a reputation that you would not collect your debts then people very quickly stop paying you. This very simple strategy worked very well. On annual turnover of $80-$100 million a year we very rarely had bad debts in total over $25,000 and there were years where we had none at all.

This strategy seems to be echoed in the approach the EU is now taking to Greece. I have done quite a bit of reading and thinking about the issue over the last week or so as understanding geopolitical and economic risk is important to my work as a futurist. I am going to use some of the details in a workshop on uncertainty that I am running later in the month. One standout feature seems to be that the EU is concerned that if they go soft on Greece then Spain. Portugal, Italy and others may feel emboldened not to pay back some of their debt and the problem will spread.

However the story is much more complex than that and the details are an object lesson in the fact that social, political and economic issues are intertwined in these sorts of issues, often at a very personal level of the decision makers. They also demonstrate that once stories are embedded in the collective consciousness they are hard to shift. The first rule of politics is that it is always easier to convince people of something they already believe. I am writing this as the Greek referendum is taking place and I think it is worth putting some of the facts on the table.

When I have spoken to people in Australia about the Greek situations they have defaulted completely to the story that the Greeks over borrowed and have been profligate and undisciplined in a fiscal sense. That story is certainly true but it is the facts of a long time  ago and the lenders were certainly complicit in lending the money. When you tell people that most of the bailout money has gone to pay out private lenders and that over the last five years the following has happened they are totally surprised:

“Since 2009 the Greek state’s deficit has been reduced, in cyclically adjusted terms, by a whopping 20 per cent, turning a large deficit into a large structural primary surplus. Wages contracted by 37 per cent, pensions by up to 48 per cent, state employment by 30 per cent, consumer spending by 33 per cent and even the current account deficit by 16 per cent.Alas, the adjustment was so drastic that economic activity was choked, total income fell by 27 per cent, unemployment skyrocketed to 27 per cent, undeclared labour scaled 34 per cent, public debt rose to 180 per cent of the nation’s rapidly dwindling GDP”

This is even more dramatically shown in the following graph:

via Interfluidity (see below)

This is all part of the argument around whether austerity works or whether austerity contributes more to the problem. Apart from the fact that if you are measuring risk as a ratio of debt to GDP then crashing the GDP makes the problem worse, it is obviously very hard to pay back debt if your economy is suffering in this way. This is compounded when the predictions by the lenders are continually optimistic and completely wrong: 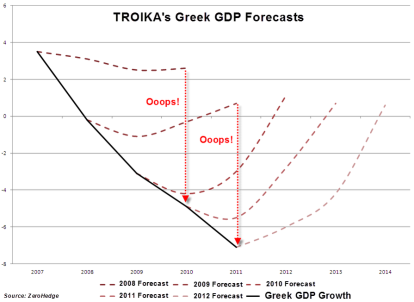 Via interfluidity – see below

It is easy to see from these graphs and the reality of unemployment and economic depression why the general person in the street in Greece might be disillusioned at the moment.

If I was a Greek voter right now I would be inclined to vote against the proposal to agree to the new lending and austerity measures because I think there is still a path of negotiation via that route. My concern about the opposite vote is that we will see significant political disintegration in Greece that will feed into radical political movements and that the long term future of the EU will be threatened both from without and within.

Beyond the financial implications of being “soft” on Greek debt I think that there is a large piece of decision making that is occurring here because of personal political considerations and entrenched positions of bias. That is always a poor environment for clear decision making and  timely reminder when we try to analyse these issues we must always ask the question of a story that is being told :  “who benefits from the story being told now or in this way?

If you wish to be further informed on these issues I suggest you read:

Where did the Greek bailout money go?

The Road To Grexit

I would encourage people to point out where they think the information I have provided here is incorrect or presented in a biased way. We are all better off when we see issues from multiple points of view.