Chris Rice and I are currently writing a book on the rise of autonomous vehicles and their widespread effects across our economies (entitled Rise of the Autobots: How Driverless Vehicles will change our Societies and our Economies). One of the keys to looking at what these changes might mean and the rate at which they will occur is the speed of adoption speed of electric cars and autonomous vehicles combined together.

There have been lots of excited announcements about electric cars over the last few months including:

When Will Electric Cars Go Mainstream? It May Be Sooner Than You Think

The reality is that the adoption of electric cars will have several bottlenecks including but not limited to:

Both battery production and electric car production are ramping up but the last point is very important when we start looking at the critical mass needed to disrupt a range of industries, including petrol stations and their supply chains, maintenance and repair systems, and the electric power grid. Even when it becomes a sensible economic decision to purchase a new electric car over an internal combustion engine (ICE) powered car, someone with a 7 year old vehicle is not going to immediately changeover. This is both due to the capital nature of the change and the fact that if electric cars are more economical than ICE cars the resale value of second hand ICE cars will fall dramatically, reducing the interest and capacity of people to purchase a new vehicle (if purchase is the model). This will be exacerbated if the new electric vehicles also have significant advantages in autonomy.

To illustrate this issue we took a look at the vehicle fleet in New South Wales in Australia If we look at the statistics at the end of the fourth quarter in 2016 it gives us a snapshot of the vehicle legacy issue. The following graph shows the year of manufacture for light vehicles registered in NSW at the end of 2016. The majority are passenger vehicles:

If we look at heavy vehicles we get a similar picture albeit with different percentages: 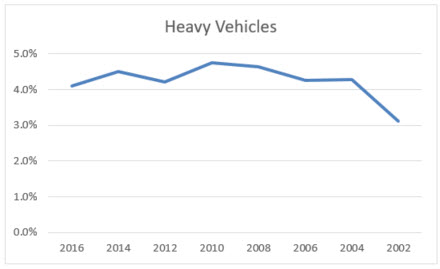 There are some differences in the data between light and heavy vehicles:

A very simplistic look at this data says that even if every vehicle sold new in Australia was electric from say 2025 was an electric car, and the purchase patterns remained stable after 5 years we would have between 31% and 40% electric light vehicles on the road and in 10 years it would be somewhere between 50 and 60%. This pattern is highly unlikely and so the real adoption rates will be well short of that. Every year that the purchase pattern is 50% electric and 50% ICE will slow the transition as those ICE cars will be on the road for a long time.

This adoption cycle is complicated by our view that increasing automation will result in more fleet ownership models, and shared car rides, reducing the total sales of new vehicles. While this means that battery and electric car manufacturing do not have to ramp up as much to get to 100% of new sales it changes the adoption curve.

Now both those simplistic analyses assume the normal pattern of car purchases and ownership will remain in place. That is also unrealistic. All we do know is that the adoption rates will be relatively slow because of the legacy issues and the turnover of the vehicle fleet as a whole. Cars are not smartphones. We will be doing some more modelling on the possible scenarios over the next few weeks. Follow us here if you want to see them and help us think through the changes.

Featured Image is from :